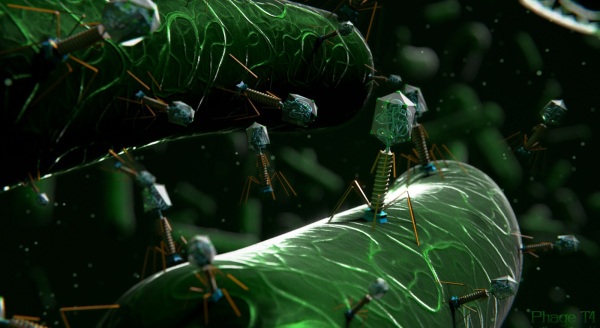 In the microscopic life that thrives around coral reefs, researchers have discovered an interplay between viruses and microbes that defies conventional wisdom. As the density of microbes rises in an ecosystem, the number of viruses infecting those microbes rises with it. It has generally been assumed that this growing population of viruses, in turn, kills more and more microbes, keeping the microbial population in check. It’s a model known as “kill-the-winner” — the winners being the blooming microbial cells and the killers being the viruses (mostly bacteria-killing viruses known as bacteriophages) that infect them.

However, a recent study of virus-host dynamics near coral reefs suggests that, under certain conditions, viruses can change their infection strategy. As potential host microbes become more numerous, some viruses forego rapid replication and opt instead to reside peaceably inside their host, thereby reducing their the viruses’ numbers. The researchers refer to this alternative model as “piggyback-the-winner,” and it could have implications for phage-based medicine and ecosystem resilience in the face of environmental disturbances that promote microbial blooms.

Microbial population explosions can take many forms–algal blooms in the ocean and in lakes, fungal blights in soil and bacterial infection in humans are just a few examples–and how viruses respond to this rapid microbial growth has long interested ecologists. Many viruses can make the switch between rapid replication, and dormant coexistence. For decades, most researchers have assumed that during microbial population booms, their viruses take advantage of the opportunity to multiply by killing the abundant microbial winners.

“The logic behind it has been around for a while. The reasoning is very seductive.”

So an international team of collaborators decided to put this model to the test. They collected samples of microbe-rich seawater near coral reefs in both the Pacific and Atlantic Oceans. Then, using a combination of microscopic and genomic techniques, they analyzed those samples for the abundance and nature of both microbes and the viruses that infect them.

Under the kill-the-winner model, researchers would expect to find more viruses per microbe in samples with a high microbial density and growth rates. What Knowles and his team found, however, was just the opposite: As microbial abundance increased, the virus-to-microbe ratio decreased significantly.

Next, the team ran an experiment in which they incubated seawater from a pristine coral reef location and from Mission Bay in San Diego for several days, during which they monitored the viral and microbial abundance. The results matched their field sampling, with virus numbers staying relatively low even as microbial populations bloomed.

Why weren’t the viruses exploiting the increasing population of hosts by infecting them and multiplying rapidly? Why weren’t they killing the winner? Exploring this phenomenon further, the researchers used metagenomic analysis to determine whether the viruses in the sample showed virulent, predatory traits or the hallmarks of non-predatory lifestyles. Intriguingly, they found that in samples with a higher microbe count, viral communities became less virulent.

Instead of multiplying and killing off their booming host population, more of the viruses instead integrate themselves into their host. The viruses replicate more slowly, but they also avoid competing with other viruses and having to navigate with the host’s own immunity defenses. This piggyback-the-winner model better explains virus -host dynamics during periods of fast microbial growth than the established kill-the-winner model, the researchers said.

“When you have a fast-growing host, if you’re a virus, you profit more from integration,” Knowles said. “It’s just intelligent parasitism.”

A better understanding of these dynamics holds promise for improving human health. For example, specially targeted phages have been suggested as a possible therapy for conditions like cystic fibrosis, which is caused by frequent bacterial lung infections. This discovery also could help improve marine ecologists’ understanding of the microbiological forces that influence coral reef health.

And of course, what post about bacteriophages would be complete without this… 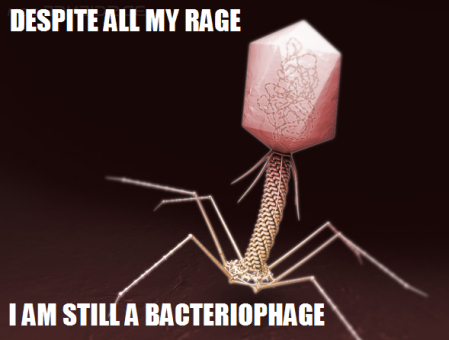 This entry was posted on March 16, 2016 by FullMetal. It was filed under Biology and was tagged with biodiversity, cell biology, climate change, infectious diseases, nature, parasitology, science, virology.