I’m excited that today we are starting the know your spinal cord series that I’ve been working on. Today we are going to take it from the top, no really. We’re starting at the top of the cord and we will work our way down. So without further delay, let’s look at the curious case of the medullary pyramids!

It turns out, it may just be due to your spinal cord! Well, evolution, but we really aren’t sure WHY the left brain controls the right body, that is just our best guess for the moment. We do however know how it happens. Believe it or not, there is a reason why the brain controls the body the way it does. That magic is called the decussation of pyramids!

First, let’s define decussation. Decussation is just a fancy term that means something crosses over the midline of the body. If you had a pen and you drew a line from your left shoulder to the right shoulder, we could say this line decussates at the sternal notch (right between the clavicles).

Way at the bottom of the brain stem, we have the medulla!

Now that we know where we are in the brainstem (hopefully). Let’s talk about what the neurons do here. A (very) simplified model of how the brain connects to the spinal cord would look something like this. You want to move, so your motor cortex (See below) sends a signal via neurons to the spine. This is done with one very long neuron that innervates (connects) the motor cortex to a certain area of the spinal cord. Yep it’s pretty much one really long neuron. Don’t worry if that seems odd, it was odd to me at first too, but for our simplified view, let’s leave it there and trust me that is the least weird bit about the spinal cord. 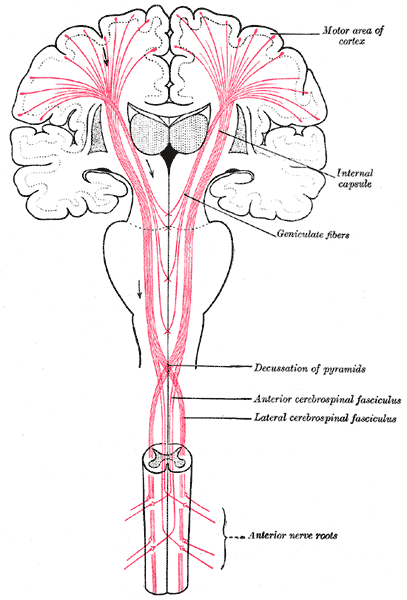 However, as we discussed the right side of the body is controlled by the left side of the brain, why is this? Well the honest answer is that it isn’t a straight pathway from the motor cortex to the spinal cord. Neurons first exit the motor cortex, travel down the brainstem and to the decussation of pyramids. Here is where the decussation part comes in (and remember it is a fancy term for crosses the midline of the body). Once the neurons reach the pyramids, about 90% of the fibers decussate and travel down the spinal cord.

So there it is, that one weird trick your brain uses to control the opposite side of the body (the fancy term for that is contralateral side). Next we will talk about the organization of the spinal cord, which is a LOT like the organization of the brain. After that we can discuss the different tracts that make up the spinal cord. I’m excited about this becuase we will see what happens to the 10% of the neurons that don’t decussate at the medullary pyramids and if you’re a big weirdo like me, it’s super exciting and just plain weird.

This entry was posted on January 23, 2020 by The Lunatic. It was filed under 365 Days of Academia - Year one, Neuroanatomy and was tagged with blog, daily routine, Education, learning, life, lifestyle, neurology, neuroscience, PhD, science, spinal cord.