Day six already! Today is day six of knowing your spinal cord and we’re talking about the spinothalamic tract today. If you’re interested in the other posts, the first covers the medullary pyramids and I even have a category just for these posts. Of all the tracts of the spinal cord, this is probably my favorite becuase it is just so weird! You’ll see what I mean, so let’s get to it.

Yesterday we covered the medial lemniscus tract this was our first look at an afferent (ascending) pathway. That pathway if you recall was responsible for fine touch and proprioception, but as humans we have so many other senses! This tract is responsible for pain, temperature, and crude touch.

Like the medial lemniscus tract, the spinothalamic tract is comprised of three neurons. Nerves coming from the skin go into the pseudounipolar neurons located within the dorsal root ganglion, which we covered in our last post. These neurons go to the dorsal horn (or the posterior) of the spinal cord at that segmental level. These neurons are of two types which we will define for you here:

Now as you may have guessed from the name of the tract, it travels to the thalamus (located in the brain). HOWEVER, and that is a big however, there is quite a bit of interesting things the neuron does before it gets to the brain. We’ve pointed out that most neurons decussate at the medulla and we even got into some of the neurons that do not decussate there. This tract is one of those tracts that do not decussate at the medulla. Unlike the previous tract which decussates right after it entered the spinal cord, this one does something completely different.

In this case the neuron enters the dorsal) horn at the segment, but THEN it ascends or descends one to two levels of the spinal cord. This happens in something called the tract of Lissauer (or Lissauer’s tract) and is named after the guy who found it. That is located at (you may have guessed this) lissauer’s fasciculus, which we can see labeled below.

After it gets to a completely different level from where it entered, it then synapses with the second neuron in one of two areas located within the grey matter, the substantia gelatinosa or the nucleus proprius, which you can see the location of both below. The image above shows the pathway as well, but only a single area. 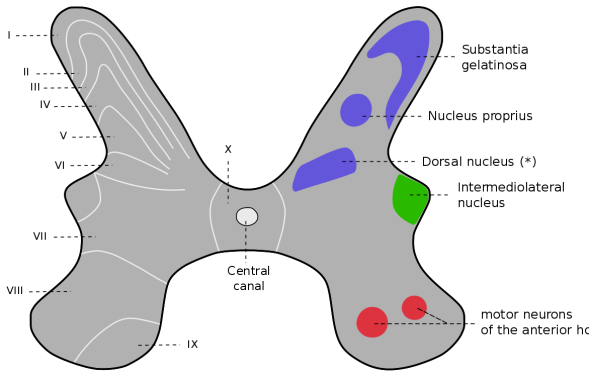 Now the substantia gelatinosa is named because it is a gelatinous mass of neuroglia and nerve cells and it extend the entire length of the spinal cord all the way to the medulla! So once our nerve has synapsed here, the story is very similar to the medial lemniscus tract, it decussates (crosses the midline of the spinal cord) at the anterior white commissure. Then it finally travels to the thalamus. I get that this was a lot, so let’s recap a little to make this more succinct.

Our nerve enters at the dorsal root ganglion (like all ascending tracts do). Then it travels through the tract of Lissauer, where it can ascend or descend one to two spinal cord levels. Here it synapses on our second order neuron (the second neuron in our chain of neurons to the brain). Next, it decussates through the anterior white commissure. Finally, it travels to the thalamus via the spinothalamic fasciculus. It synapses there on our third order neuron, then finally arrives at the somatosensory cortex! Wow, that was a lot!

Well, this took quite a bit longer than I had hoped, so I’m not sure what I’m going to talk about tomorrow yet, but I will figure it out. I really hope that I’ve made it clear why I’m just so excited about this tract!

Why does it travel one to two levels before it decussates? I have no idea! That’s what makes it so fascinating! Like i said, it’s my favorite tract and maybe after today it’s your favorite tract too.

This entry was posted on January 28, 2020 by The Lunatic. It was filed under 365 Days of Academia - Year one, Neuroanatomy and was tagged with blog, daily routine, Education, life, lifestyle, neurology, neuroscience, PhD, school, science, spinal cord.