Know your spinal cord – The lumbar cistern and cerebrospinal fluid 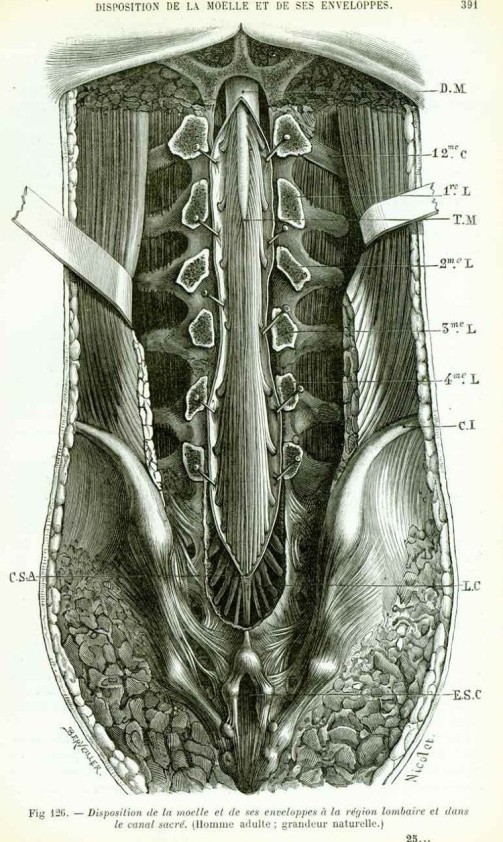 We are well on our way to finishing up the know your spinal cord series that I am doing. Today is day fifteen and as usual if you’re just tuning in we have a whole neuroanatomy category dedicated to these posts for you to check out organized in reverse chronological order. If you want to start at the beginning, that would be the medullary pyramids. Today we are at the other end of the cord, this is the lumbar cistern!

Yesterday, in a shocking reveal, we explained that the spinal cord doesn’t run the full length of the spine and that the nerves that form the cauda equina grow into the vertebral column to remain attached as the spinal cord gets pulled further up. This leaves us a rather large (not that large) space to fill. That is where the cauda equina lives, but this space is also home to what we call the lumbar cistern.

The lumbar cistern is just one of many cisterns found in the body. While it doesn’t house the spinal cord, it certainly isn’t empty, instead it is full of cerebrospinal fluid. Now before we get into what the cistern is exactly, let’s talk about the fluid for a few reasons, mainly it has a very important job, but also because we would be missing out on a rather large bit of how the spinal cord lives.

Cerebrospinal fluid (CSF) is a clear liquid that surrounds the brain (hence cerebro-) and the spine (-spinal). They share this fluid and it travels around the cord, the brain, and inside of both. The central canal of the spinal cord runs the entire length and lets CSF run through the center of the cord, for those who need a refresher, the image below shows the location of the central canal in a cross section of spinal cord. 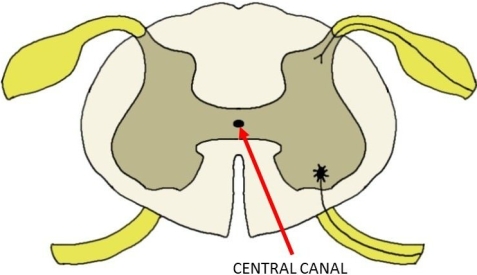 The human body replenishes the CSF at a rate of about 500 mL a day. At any one time we have roughly 125mL of fluid just hanging out in there being pumped around like the blood in your veins. For those who are in the US that is about half a cup at any given time and about two cups produced a day.

I mean it when I say it gets pumped around like the blood does. It pulses through the brain and and spinal cord at roughly the same rate as the heartbeats. We aren’t exactly sure why this happens or even how it happens, there is still a lot of debate around how this works, but we think it is due to the expansion and contraction of blood vessels as the heart is beating, which then puts pressure on the cord and brain and thus circulates the CSF. Below you can see an MRI video of the brain as the heart beats, this is definitely not a static system.

We do know for sure that CSF circulates. This is actually important because the fluid has a few different roles. First it helps protect the brain and spinal cord from the ravages of gravity and movement. If you’ve ever moved around in a pool you know two things, you feel lighter and there is some resistance to your movement. Both of these things help protect the brain and spinal cord from damage, they are very soft tissues and need all the help they can get. In fact, if the brain sat without CSF to support its weight, it would crush itself (if you’ve ever seen how they fix a brain for dissection, you know this is a delicate process, if you haven’t seen this and would like to, this video does a great job showing an unfixed brain). In fact, I recommend all of the videos by Dr. Stensaas, she is quite brilliant.

Secondly, it helps move things around. Primarily waste products, but also different substances that help regulate the brain such as neuroendocrine factors. We mentioned that the CSF is replenished quite frequently, waste products are carried by the CSF and then the CSF (along with the waste) gets absorbed into the bloodstream.

In medicine we can use the CSF for diagnosis, we do this by drawing from the lumbar cistern. This procedure is called a lumbar puncture (or colloquially referred to as a spinal tap) and we draw from this area because there is almost no risk of damaging the spinal cord or nerves. We can use the CSF to diagnose things like serious infections, such as meningitis; other disorders of the central nervous system, such as Guillain-Barre syndrome and multiple sclerosis; or cancers of the brain or spinal cord.

While it sounds like it hurts, it isn’t super painful to have a lumbar puncture. You mostly feel the pressure of the needle and of course it can feel weird if they rub against the vertebra, but they do this without anesthetic and it’s considered minimally invasive. Below is an image of what CSF looks like, which is underwhelming I’m sure since it really does look like water. 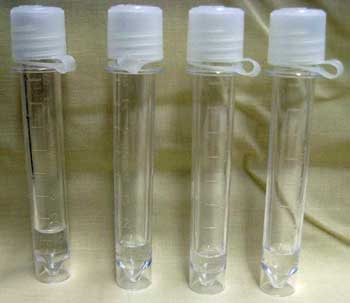 These should not be confused with the ventricles. It’s subtle; ventricles are full of CSF as well, but they are the inside (such as the brain) and are formed by spaces in the brain for example, where cistern are on the outside and formed by the meninges.

That is probably more than you ever wanted to know about the lumbar cistern and CSF, so next up we should talk about the meninges and then we can move on to some other interesting part of the spinal cord. We will probably start getting into diseases of the spinal cord and what not soon too, that will be interesting for sure (if you’re a big nerd like me that is).

This entry was posted on February 7, 2020 by The Lunatic. It was filed under 365 Days of Academia - Year one, Neuroanatomy and was tagged with blog, daily routine, Education, life, lifestyle, neurology, neuroscience, PhD, school, science, spinal cord.